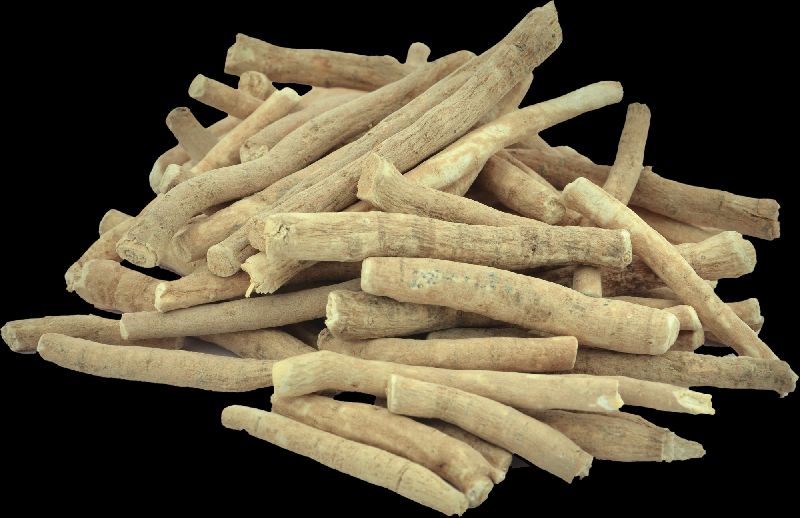 Shatvari belongs to the Asparagaceae family. In earlier classification systems, it was classified as part of the Liliaceae family.

Shatvari is a climbing plant that grows all over India. It can be found in low forest and tropical areas, but it is particularly abundant in northern India, in the Himalayas, at an altitude of 1300-1400 meters. The plant grows 1-2 meters in length and is known as an “armed climber”. It has shiny, small, green leaves that are uniform and much resemble pine needles. The flowers are small and white, and have a stamen with white filaments with tiny red anthers. The finger like roots tend be clustered beneath the surface. They are tuberous and grow anywhere between 30 cm to over 60 cm in length, tapering at both ends. The fruits are tiny berries that are purple/black when ripe. Shatvari flowers in July and fruits in September. Below are some images to help illustrate, including botanical drawings. The Western edible variety Asparagus officinale shares some properties but it is more diuretic.

The tuber is the main part used medicinally, however the leaf has also been used as well.

The tubers are usually harvested in the Autumn. Although usually wild crafted, Shatvari has also been successfully cultivated. Shatvari roots mature in approximately 12-14 months after planting. The time generally depends upon various conditions such as soil PH and climatic conditions. A one hectare grow area can yield 12,000-14,000 kg of fresh roots , which equates to 1000-1200 kg of dried roots. A single plant yields approximately 500-600 grams of fresh root. A healthy Shatvari plant can be harvested for 10-15 years.

Shatvari is known in ayurvedic medicine as the queen of herbs. The word Shatvari literally translates to “she who possesses a hundred husbands”. It has been used for millennia to enhance the fertility of men and women , and as a sexual tonic. By the 16th century, the herb emerged as a highly effective female tonic and galactagogue. It has since been a part of most aphrodisiac formulas.

Asparagues racemosus was first mentioned in the Atharvaveda and the Rig Veda, where it was noted as a powerful Rasayana that enhances memory , youth, strength and intelligence. Rasayanas, are plant medicines that promote well being by increasing cellular vitality and resistance.

Historically, the tubers have been used for: immune function, to increase milk flow, ulcers and spasms. They has also been used to treat nervous disorders, liver diseases, inflammation and infectious disease.

The root infused oil was used topically to treat skin diseases, and the leaves as well were infused in ghee and applied to boils and sores.

Charaka Samhita and Sushruta Samhita spoke of Shatvari as a: styptic and ulcer healing agent in internal hemorrhage, healer of female genitourinary disorders and an intestinal astringent and disinfectant (for diarrhea). It also mentions its use as a nervine tonic in the treatment of epilepsy and migraines. Ayurveda believes that Shatvari works as a blood purifier for skin diseases, suggesting an alterative like action. Sushruta also mentions the use of the drug in : internal abscesses, oedema, consumption, respiratory troubles, urethral discharges, and seminal disorders. For urinary calculi a decoction was boiled with ghee and prescribed internally.

In TCM, the herb is believed to have a positive effect on the energy of the heart. It is known as “Tian Men Dong” which translates to heavenly spirit herb. It is revered by Buddhists, yogis and monks for its ability to open the heart. Another name for Shatvari is the “flying herb” as it allows a person to fly through the universe and achieve amazing dreams. It allows ones consciousness to drift into space when asleep. It is believed this herb lifts your mind and vision while giving you dreams of flying. Shatvari is also considered a rejuvenating herb that nourishes inward kidney Qi. It is stated to be specific for : dryness (including vaginal dryness), sexual debility, infertility and longevity.

Planet: Shatvari is definitely a moon herb. Moon herbs are demulcent and tonic, and have an affinity for breasts and the female reproductive system. One of the negative traits “moodiness” points to a hormonal theme, which Shatvari undoubtedly addresses.

Shatavari is considered one of the main female rejuvenative herb. Its most popular modern application is as a sexual, reproductive and pregnancy tonic. As such it is regularly seen in formulas that treat any of these above noted conditions. The information on Shatvari is vast and overwhelming. As such I have compiled an effective shortlist of how the herb is viewed/used in today’s modern world by herbalists, ayurvedic practitioners and phytotherapists alike.

Some structures of Saponin A4 were renamed as sarsasapogenin, due to it having one molecule of glucose and two of rhamnose

-Powder : Traditionally 3-6 grams is taken per dose. However one teaspoon , 1-3 x a day is also sufficient for most patients.

Again with the vast amount of information available, I have sifted through and provided a general summarisation of the findings:

Shatvari may have potential interactions with other drugs or foods that share the same cholinergic and monoaminergic pathways.

Methanolic extracts of the herb showed teratological disorders in animals. This indicates that Shatvari should be used cautiously during pregnancy.

Shatvari is one of the primary herbs recommended for female health. It finds itself useful in a plethora of combinations. These are my personal recommendations based on my study of the herb.

There are hundreds upon hundreds of recipes that include Shatvari. Below is a list of some important ones:

Singh N, Jha A, Chaudhary A, Upadhyay A. Enhancment of the functionality of bread by incorporation fo Shatavari (Asparagus racemosus). Retrieved from https://www.ncbi.nlm.nih.gov/pubmed/25190861

Sharma U , Kumar N, Singh B. Furostanol saponin and diphenylpentendiol from the roots of Asparagus racemosus.Retrieved from https://www.ncbi.nlm.nih.gov/pubmed/22978214

Agrawal A, Sharma M, Rai SK, Singh B, Tiwari M, Chandra R. The effect of the aqueous extract of the roots of Asparagus racemosus on hepatocarcinogenesis initiated by diethylnitrosamine.

Dhuley JN. Effect of some Indian herbs on macrophage functions in ochratoxin A treated mice.